CCTV operators in London captured an unprovoked violent attack of two young men waiting on a street corner in Romford. The two victims were leaning against a bike rack waiting for their ride to pick them up.  They reportedly had no prior interaction with the three criminals who decided to randomly attack them.

The first victim was 20-year-old Andy Griffiths.  Andy suffered a broken jaw and was stabbed four times in the assault; he survived.  The second victim was 20-year-old student Daniel Pollen.  Daniel was also physically attacked and stabbed once; he did not survive.  His death was a result from a two inch stab wound that punctured his heart.

This video highlights the harsh reality of violent crime in modern society. The London stabbing attack was unprovoked and intended to cause serious harm to complete strangers.  To add insult to injury, two of the assailants only received 5-year sentences.  During their sentencing the attackers made cold apathetic statements that showed no remorse for their actions or causing the death of an innocent person.

According to Daniel Pollen’s mother, “They said in the witness box they’d gone out to enjoy themselves.  They felt it was their human right to attack Daniel and Andy as part of their evening entertainment.”  The killer was 17-year-old Michael Lynch, who received a life sentence with a 15-year minimum.  Lynch could be eligible for parole after serving just 15 years!

“Every feeling has gone out of you.  You’re just numb.  It seems so surreal.  I remember thinking, ‘This doesn’t happen to us.  It happens to other people.’
–Victim's Mother

This may never happen to you in your lifetime.  But it could.  As with many surviving crime victims and family members of deceased victims, there is often a shared disbelief that something so heinous and violent could actually happen to them or their family.  This is evidenced by the quote from the victim’s mother above.  Violent crime and criminals don’t discriminate.  People from all walks of life experience violence.  The consequences of not be prepared could be fatal, just as it was in this video.

Here are a few expert self-defense tips to improve your situational awareness, enhance your self-defense preparedness and help keep you and your family safe!

Streets and public areas around bars, night clubs, gas stations and sketchy parts of town present you with an increased risk of criminal activity.  Your level of awareness and alertness must increase proportionally to your level of perceived risk.  A key phrase in that sentence is ‘perceived risk’.  You will not be able to ‘perceive risk’ if you aren’t situationally aware of your environment and actively assessing for potentially dangerous people or situations. 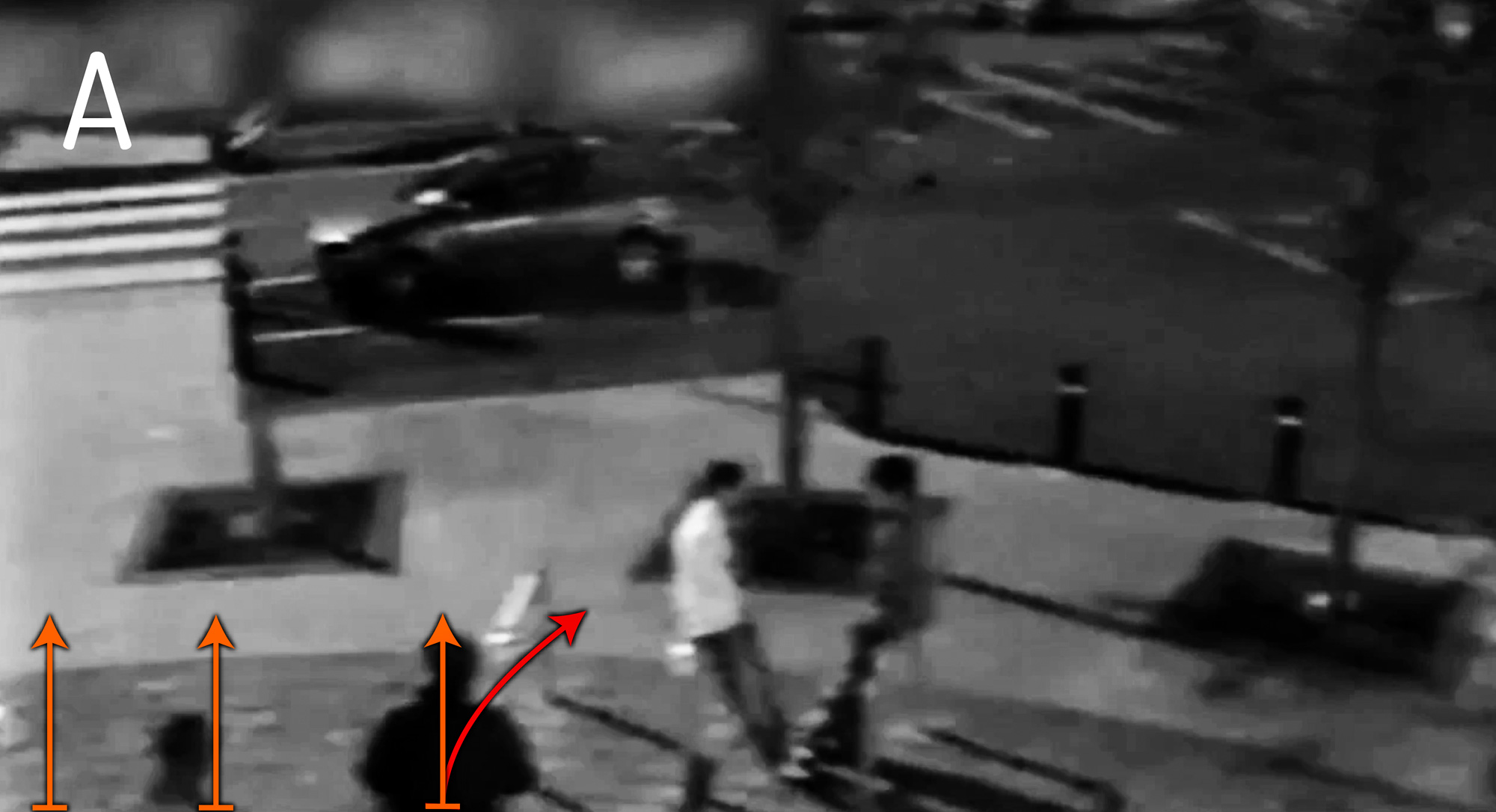 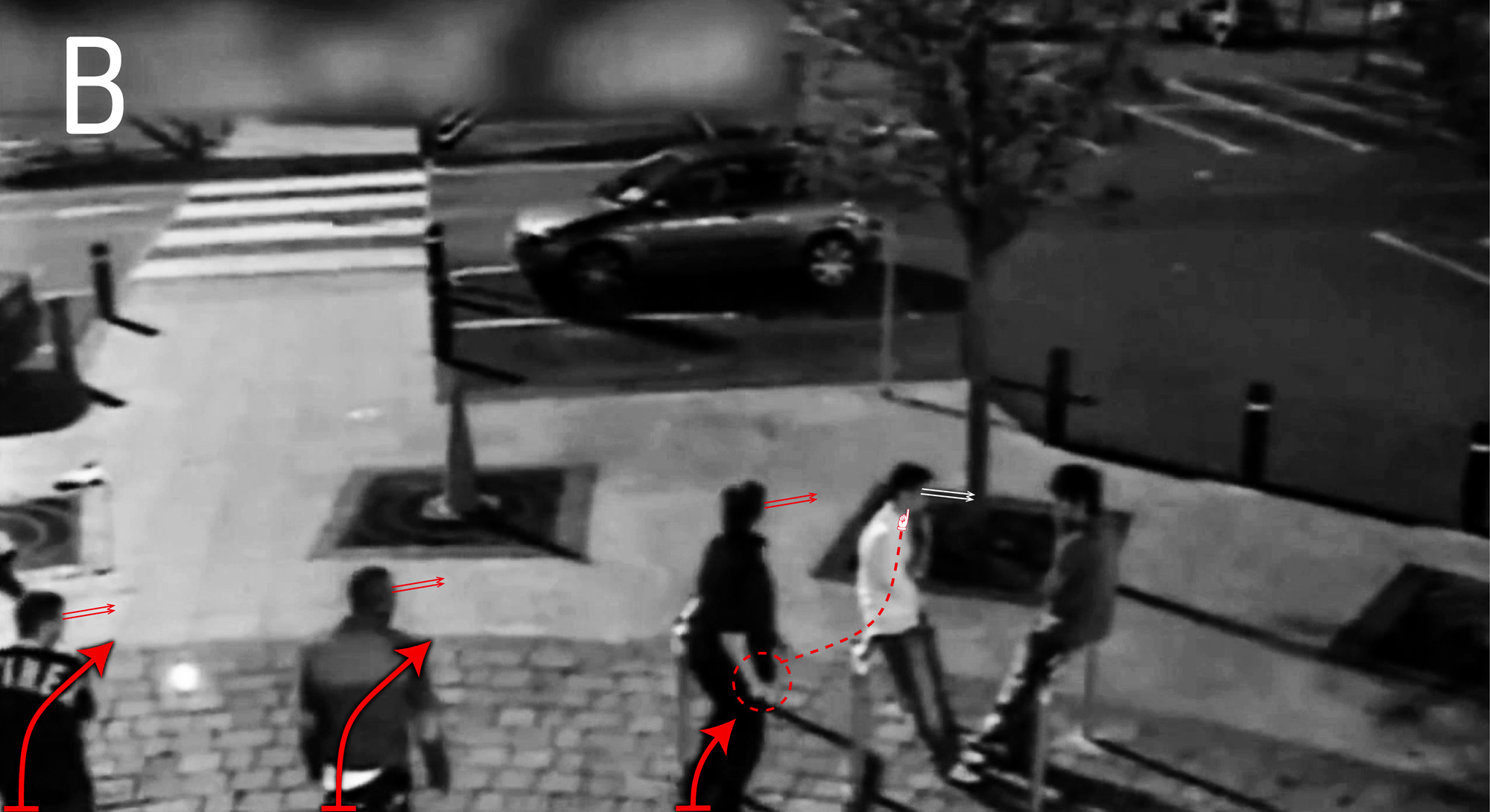 The CCTV London stabbing video shows the three criminals originally walking in a straight line trajectory toward their car in the parking lot (A).  Their trajectory began to change as they decided to target and approach Andy and Daniel.  The initial aggressor’s trajectory veers swiftly toward Andy in preparation of the ambush haymaker punch (B).  Missing these movement based pre-assault cues resulted in a significant impairment in the victim’s defensive capabilities.

Had Daniel and Andy seen this movement based pre-assault cue happening in real-time they could have verbally intercepted the threat, drawn self-defense weaponry, or used the bike racks as barriers to gain positional advantage and better defend themselves.  At a minimum, recognizing those critical pre-assault cues likely would have prevented the initial blow that shattered Andy’s jaw and left him semi-conscious on the ground. ⠀

Remember this important self-defense tip: Your primary goal when defending yourself from any type of violent physical attack is to stay standing and stay conscious.  If you analyze the London stabbing video closely you will see the first two punches thrown by the attackers were wide looping haymaker punches.  If the victims were situationally aware, looking for pre-assault cues and had a basic understanding of criminal assault biomechanics, they could have noticed key warning signs of an impending attack: strangers rapidly approaching, weight shifting to load up on a punch, blading of the body to disguise the attack, and clinching the fist.

Taking into account all of these pre-assault cues with the environment and situation, alarm bells should have been going off in Daniel and Andy’s head.  Unfortunately for the London stabbing victims they likely didn’t have any real world self-defense training or experience.  The following video by Shivworks owner Craig Douglas provides some great advice for managing and surviving a haymaker punch.  We have personally trained with Craig in his ECQC (Extreme Close Quarters Concepts) course and had an opportunity to test these concepts live in Force on Force scenarios.  There’s a great deal of bullshido in the martial arts community about defending haymaker punches.  This is legit folks.  Follow Shivworks & Craig’s stuff, it’s definitely worth your time and attention.

Generally speaking, the preferred outcome of any potential conflict is to avoid, deescalate and escape if at all possible.  This is not an absolute however.  There are some situations when you can’t avoid or deescalate the conflict.  There are other situations where you can’t just flee and escape the conflict.  What if you were out with your young children or physically disabled grandparents?  What if you were caught in an environment or building where you couldn’t physically exit or flee?

In this situation your best friend was just knocked unconscious and you are now being flanked by two more aggressors, one of which has just reached into their pocket to pull out a knife.  In a wide open parking lot Daniel could have fled and probably avoided being stabbed, but he didn’t…  I wouldn’t have fled either!  If my best friend, family or loved one is laying hurt on the ground it’s time to fight.  You must be willing and able to deliver overwhelming violence of action in situation like this.

What steps can you take to become better equipped to defend yourself and others in a situation like this?  Start training and studying realistic and practical combative arts.  Find instructors who will teach you how to manage, line up and fight multiple attackers.  Find an instructor who will teach you how to deal with straight line stabs to the body.  Participate in Force on Force training and classes with qualified instructors.  Start carrying any tools or equipment that allow you to create a force multiplier or defensive advantage.

We know that carrying self-defense knives and concealed carry firearms in the UK is illegal (even though the criminals carry and use them).  So learn to carry, deploy and fight with a tactical flashlight or tactical pen.   If you are a law-abiding US citizen, get your Concealed Carry permit, arm yourself and learn how to gunfight.  This situation may have turned out very different if the victims were skilled martial artists or concealed carry citizens with legit training experience.

BE AWARE.  GET PREPARED.  DEFEND YOURSELF.

Our mission to help you become more aware, prepared and ready to defend yourself, your family or your home against the violent predators of the world.  If you’d like to train with us locally we offer private training lessons for individuals, groups and families.  We also have weekly self-defense and weapons classes at our South Durham Training Center.  If you are in need of your North Carolina Concealed Carry Permit, we offer that every month and have an outstanding 5-Star rating on Google, Facebook and Yelp.  If you aren’t local and still would like to train with us, we offer online coaching via skype.  For more information on any of our training services or to get a training quote please send us an email at [email protected].  Stay safe and stay sharp!

Get These Self-Defense Multipliers From Amazon

Previous Ground Self-Defense
Next Learn How To Breakfall